Sudan is one of the largest countries in Africa and over the centuries has attracted many intrepid explorers in search of the hidden treasures of the Nubian Desert. Its vast desert and rocky landscape is sparsely populated with small towns and transient nomads. The capital city Khartoum sits at the confluence of the White and Blue Nile, and is a chaotic mix of dusty streets, bustling souks and welcoming locals. The lush Nile Valley hides lost Turkish and Roman cities and ancient pharaonic tombs.

For the more adventurous traveller, our small group tours uncover this vast and intriguing North African country. Starting in Khartoum all our tours explore the barren beauty of the Nubian Desert. From the forgotten pyramids at Meroe to the holy mountain of Jebel Barkal, we sleep under the starry desert skies and spend time learning the culture of the local inhabitants. You'll also cruise on the River Nile and explore the mazy souks and dusty museums of Khartoum. All our Sudan group tour itineraries can also be customised and arranged as private tours if you prefer. Overall we feel Sudan truly offers a completely unique travel experience and if you're looking for a really out of the ordinary holiday experience, with very few other tourists around to share it with you, then Sudan is a great option.

Note - none of our tours visit South Sudan and we follow official government travel advice at all times. 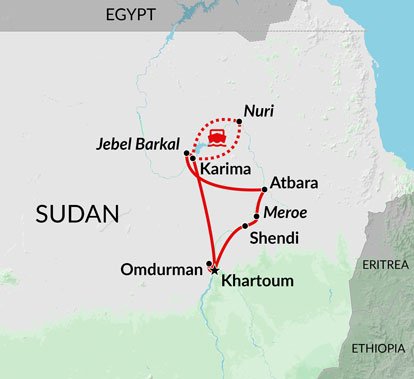 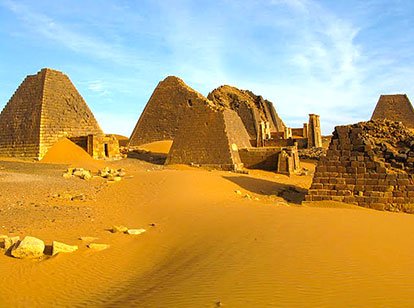 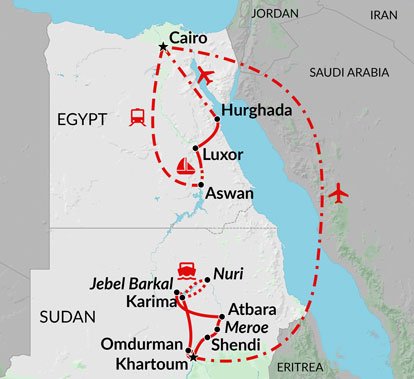 Is it safe to visit Sudan?

Sudan is safe for tourists to visit if you avoid the dangerous areas and follow the advice of authorities.

What is the official currency of Sudan?

The currency used in Sudan is the Sudanese pound (SD), which is made up of 100 subunits known as piastre or qirsh.

When is the best time of the year to visit Sudan?

The best time to visit is from November to February, as the temperatures are the lowest, making travel more comfortable. March to May is a good time for diving trips in the Red Sea.

What should you wear in Sudan?

Dress conservatively if you are a woman, and cover your legs, cleavage and shoulders. Men should avoid wearing shorts or being bare-chested in public areas.

Can you drink the tap water in Sudan?

The water is unsafe to drink in Sudan, so you should only drink bottled water during your trip

How do I plan a trip to Sudan?

The best way to see Sudan depends entirely on your own individual travel interests. Encounters Travel offers immersive and authentic tours in Sudan. Whether you would like to explore the souks of the capital city Khartoum, discover the secrets of the ancient civilisations and ruins found within the Nubian desert or see the Egyptian tombs and lost Turkish and Roman cities - we have you covered.

How much is a meal in Sudan?

Meals in Sudan are relatively affordable by Western standards, depending on which type of restaurants and food establishments you visit. A meal for two at a mid-range restaurant will cost around $10-15, whilst the average lunch and a drink for one person costs between $4-6.

Do people in Sudan speak English?

Do you need vaccinations to go to Sudan?

Each traveler should always be up to date with their vaccinations when travelling to new countries. These vaccines include measles-mumps-rubella (MMR) vaccine, diphtheria-tetanus-pertussis vaccine, varicella (chickenpox) vaccine, polio vaccine, and your yearly flu shot. The CDC recommends a meningitis vaccine if you plan to visit parts of Sudan located in the meningitis belt during the dry season. Other recommended vaccines include: Cholera, Hepatitis A, Hepatitis B, Yellow fever and cholera.

How much would a trip to Sudan cost?

The cost of a trip to Sudan depends entirely on what you would like to see, the places you would like to stay and the duration of your trip. We recommend a minimum of 20 USD per day as your budget, including food, activities and accommodation.

Where should we go in Sudan?

Sudan is one of Africa’s largest countries, however we recommend visiting the ancient ruins found within the Nubian desert, the bustling souks of the capital city Khartoum as well as the black pyramids of Meroe and the holy mountain of Jebel Barkal.

How many days in Sudan is enough?

We recommend spending a minimum of five days in Sudan, with the optimal amount of time being 10 days. This will allow for sufficient time to visit the main sites and authentically experience the beauty of this large north African country.

What is the best month to visit Sudan?

The best months to visit Sudan are November to February, which are Sudan’s cooler months making travel more comfortable. For driving trips to the Red Sea, we recommend visiting in March as this is the most popular time to visit.

Sudan is quite affordable by Western standards, food is relatively cheap with the average meal costing $6 and accommodation costs are relatively low. Travellers can expect to budget $30 dollars per day, this is inclusive of food, accommodation and activities. This kind of low daily budget is not typically found in most Western countries, making Sudan a suitable and affordable tour option.

I was pleased and impressed with the experience in booking and obtain all necessary documents in a timely manner. I am looking forward to my tour and hope the ground experience it just as good. This trip is my dream/bucket list trip.

My experience with Egypt Uncoveredwas excellent from start to finish. The Tour Guide, Sheriff, was the most passionate, enthusiastic and professional guide I have ever had on a tour and his love for Egypt really made me enjoy my time so much more.
I was cautious about arriving in Egypt given the current circumstances about the country, but felt safer that I did living in London as soon as I arrived. All of the Egypt Uncoveredstaff are very professional.

Excellent from the initial planning to every step along the way on the trip! Worry free in every way! Islam, Hussein and Mahmoud were the greatest! Please check out my review on Trip Advisor! FIve stars from this girl!
Excellent

This is our first travel through Egypt Uncovered and so far the arrangement is working very well. Our travel is not until April 2017 so I am more than hopeful all will continue to run as smoothly as it has so far.

Ant provided excellent service. He always responded as quickly as he could, attending to the questions I had for him. He was also very patient and pleasant. I depended on his knowledge and service to make the trip.
I liked the service and the tour guide & driver on the tour. They were professional and provided very good service. I thought 1-2 hotels on the trip were not quite 4-star. It also happened that this group of people was always late for schedule and our walk pace was too slow. It really needs the guide to make people on schedule and be punctual for the activity. Overall I think the time management of this tour needs improvement.

Sudan, also known as North Sudan since South Sudan's independence and officially the Republic of South Sudan, is a country in North Africa. The country is bordered by Egypt to the north, the Red Sea, Eritrea and Ethiopia to the east, South Sudan to the south, the Central African Republic to the southwest, Chad to the west, and Libya to the northwest.

The most widely spoken language in the country is Sudanese Arabic. This language is a variety of Arabic and has borrowed much vocabulary from local Nilo-Saharan languages (Nobiin, Fur, Zaghawa, Mabang). As a result, the dialect is unique to Sudan.

Following the 2011 division, which split off Sudan, more than 97% of the population practises Islam. Many of the Muslim locals are divided between two groups: Sufi and Salafi (Ansar Al-Sunnah) Muslims. Religious identity has played a role in the political divisions.

The terrain of Sudan is characterised by flat plains and mountain ranges. In the west, the Deriba Caldera in the Marrah Mountains is the highest point in Sudan. Sudan is the third-largest country in the country in the world (after Algeria and the Democratic Republic of the Congo).

The most important sector in Sudan is agriculture, which contributes to 39% of GDP. The legal system in Sudan is based on Islamic Sharia law - a religious law forming part of the Islamic tradition. The capital of Sudan is Khartoum, situated at the confluence of the Blue and White Nile.

Playing bingo, snacking while sitting on a monument or feeding pigeons may seem innocent enough to many British citizens, but these are just some of the reasons why many people have found themselves faced with hefty fines or in some cases arrested or detained abroad.

Many well travelled people are often looking for the next big thing but before the masses find out about it. One destination that is just starting to open up to adventurous travellers is Sudan.